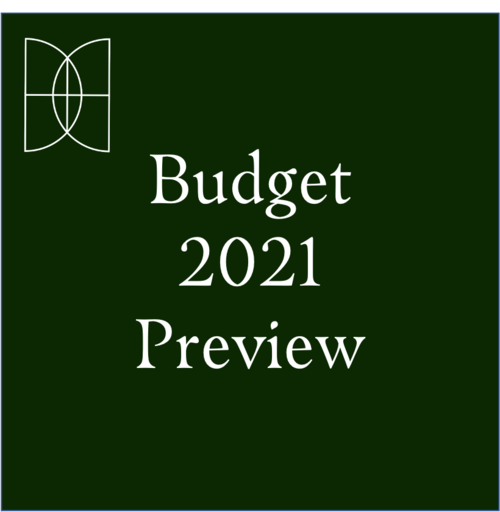 The last time a Federal Budget was delivered, the Hon. Bill Morneau was Finance Minister, the Toronto Raptors were still three months away from winning the NBA championship, and 99.99% of the population would stare blankly into space if you asked them about the coronavirus family of respiratory illnesses.

When Deputy Prime Minister and Minister of Finance, the Honourable Chrystia Freeland, rises around 4pm EDT today to deliver her much anticipated (and long overdue) first budget, 761 days will have passed since the 2019 Budget that was tabled on March 19, 2019. Since then, our historic world of go wherever, weekly family meals and daily office comraderie has been replaced with stay home, order takeout and never-ending Zoom calls … you’re on mute, your cat is cute, and that kitchen backsplash is a hoot.

In all seriousness, Budget 2021 will be one of the most scrutinized and important fiscal templates delivered by any finance minister in Canadian history.

As Canada grapples with the third – and most virulent wave – of COVID-19, an April 15th Abacus Data national survey painted a “grim mood” stage upon which the Finance Minister must perform in front of a Canadian audience with 43% of us becoming more worried about the pandemic as daily case counts and ICU hospitalizations rise at never before seen rates. Moreover, new lockdown measures in Ontario and restrictions in other provinces will surely deepen this national funk.

For the government, Budget 2021 must meet three goals:

While vaccination appointments may be hard to secure in some parts of the country, there was a surplus of advice for the Minister and her officials – courtesy of 792 submissions to the House of Commons Finance Committee (FINA) Budget consultations – on offer while building Budget 2021 over the past few months.

This advice can be segmented into three categories: green lights, red lights, and innovation ideas. Green lights are ideas that align with the current policy priorities of the federal government, red lights are those that question, urge caution, or are misaligned with Ottawa’s plans, and innovation ideas as those that stem from the current concern over lack of biomanufacturing capacity in Canada.

The main themes of Budget 2021 have been known since Deputy Prime Minister Freeland delivered the Fall Economic Update on November 30, 2020: Continued support for Canadians in the pandemic, supporting an inclusive and sustainable recovery,  and building greater resilience into the economy via a range of public policy supports, all under the alliterative narrative of ‘Build Back Better.’

In her April 8th speech to delegates during the Liberal Party virtual convention, Ms. Freeland said, “I really believe COVID has created a window of political opportunity … on the importance of early learning and childcare.” And Prime Minister Trudeau echoed this theme in his video address to the party faithful a few days later which was peppered layered with call outs to varied communities that have been disproportionately affected by the pandemic.

Indeed, women, lower-income and racialized Canadians have been on the frontlines of the pandemic in healthcare, long-term care, our 7/24/365 supply chains and warehouses, and most notably … right across the checkout counter from us during our weekly trips to pick up groceries, medication, and other necessities.

With $70 billion to $100 billion of stimulus identified last November for recovery spending over the next three years, Budget 2021 will likely include plans or promises for spending on childcare, incremental moves on national Pharmacare (both called for by the NDP), seniors support (a key ask of the Bloc Québecois), and support for students (as stressed by the Green Party) along with announcements around infrastructure and climate change.

The key factor to watch for in many of today’s Budget’s announcements will be demands from Ottawa for provincial accountability, or adherence to federal standards, as opposed to unconditional transfers to provincial treasuries.

On the other side of the political ledger, the Conservative Party questions the need and timing for further multi-billion dollar spending and Leader Erin O’Toole also urged the Prime Minister Trudeau not to raise taxes. Regardless of the budget particulars, the Tories will use their reaction opportunities to fine tune their speaking points and trumpet their economic recovery plan that will form the backbone of their platform in the next federal election.

As Globe and Mail national columnist Andrew Coyne pointed out in a detailed essay, encouraging news on from Statistics Canada on the unemployment front and strong economic growth signals foreshadow robust economic performance for Canada in 2021. In addition, the Bank of Canada released two encouraging outlooks last week on consumer and business sentiment which are positive on longer-term prospects (assuming an end to the pandemic later this year).

These data points along with caution from the Business Council of Canada, Parliamentary Budget Officer, and the International Monetary fund around excessive stimulus spending is the countervailing force to most of the pre-budget submissions to FINA that called for more federal spending.

While views on the direction of Budget 2021 are diverse, a common thread has emerged around the nebulous, if not ubiquitous, concept of innovation: Canada needs more of it, not less and it is critical to our immediate-, medium-, and long-term economic interests. The digital -- and increasingly genomic -- economy is disrupting every sector of our economy from energy to forestry, manufacturing to finance, and from the arts to culinary pursuits.

Each sector must adapt to, invest in, and scale out innovative technology platforms and our formal education and life-long career training infrastructure must be flexible enough to turn out new graduates – while retraining our existing workforce – to meet this perpetual transforming reality of the 21st century.

It can be argued that nowhere is the intersection of this societal, industrial, and political imperative more poignant or glaring than in Canada’s inability to manufacture Covid-19 vaccines and, equally alarming, other life-saving medicines. Recall that the federal government was faced with scathing criticism in January and early February due to delays in international vaccine deliveries, and newly minted Innovation, Science and Economic Development Minister François-Philippe Champagne launched a truncated one-month consultation on the state biomanufacturing in Canada which closed on March 12th. While the Minister seems earnest and sincere in his passion to tackle this issue, the consultation was a stop-gap political band-aid and nothing more … it should not be mistaken for any form policy formulation or engagement.

Since then, the government has cobbled together a series of funding announcements and a landing page to cover over a failure of government policy for the better part of 50 years by both Liberal and Conservative administrations, Canada’s endemic inability to build a coherent and enduring Life Sciences policy framework …  a framework that serves and includes the input of patients and health charities on research priorities, attracts international biopharma/medtech investments, nurtures Canadian clinicians and researchers, uses our academic health science infrastructure and generates positive health and economic benefits for Canadians.

Budget 2021 presents an opportunity for the government to say, “we get it”. This message could be delivered through policy announcements concerning innovation in domestic life sciences, global investment attraction, putting a hold on the PMPRB regulatory quagmire, partnership with the venture capital sector, along with a serious consultation effort with the range of life-sciences stakeholders. In fact, an olive branch in this direction was recently offered by an unprecedented coalition of pharmaceutical, life sciences and business organizations, the government just needs to accept it.

The size and scope of government intervention in the economy has understandably increased due to the need to support Canadians through the pandemic, the question that remains is how much of this will become permanent and what will be scaled back … Budget 2021 will start to give us a glimpse of the answer to this question.

While all federal party leaders have repeatedly said that they do not want to wage an election campaign election during the pandemic, the increasing acrimony and dysfunction of the present minority parliament is reaching a boiling point with several pieces of government legislation stalled due to opposition maneuvers. Moreover, behind the scenes, each party continues to nominate candidates and the political consensus amongst journalists, lobbyists, mandarins, and most parliamentarians themselves is that #ELXN44 will occur later this year.

However, as long as the pandemic rages on, the mood of MPs is dead set against an election as shown by a  unanimous vote of one committee of MPs in response to the House of Commons Procedure and House Affairs Committee (PROC) report on the conduct of a general election – a fascinating read for policy wonks by the way – during a pandemic.

With a set period for Budget introduction and a minimum of four days of parliamentary debate, Budget 2021 will dominate the #cdnpoli landscape for the next few weeks. As for the timing of the next general election, this prerogative and privilege remains squarely and solely in the hands of the Prime Minister.

#StayHome, #WearAMask, #GetVaccinated, and now more than even, let’s remain, as citizens, #InThisTogether.