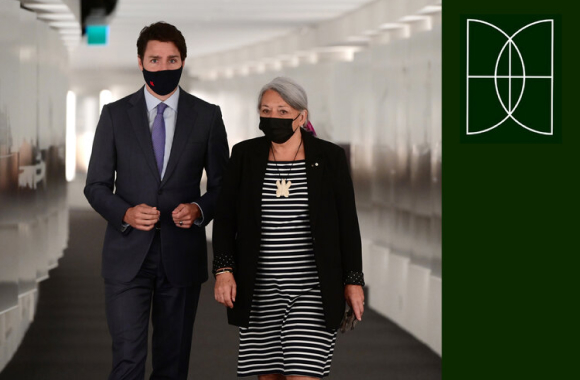 Congratulations to Mary Simon on being named the 30th Governor General of Canada. Simon makes history as the first Inuk Canadian to become vice-regal after a storied career beginning in journalism, before entering the public service and diplomacy.

Since former Governor General Julie Payette’s resignation, the role has been occupied by Chief Justice Richard Wagner, who was sworn in as Administrator of Canada on January 23, 2021.

Simon began her career as an announcer and producer for CBC North, before entering the public service upon her election as Secretary of the Board of Directors of the Northern Quebec Inuit Association. She was President of the Makivik Corporation until 1985, and during her time in that role got involved with Canada’s National Inuit Organization, Inuit Tapiriit Kanatami.

A trailblazer for the Inuit community, she served in a number of roles for the Inuit Circumpolar Conference (ICC), beginning in 1980 as Executive Council Member, rising to President in 1986. Her successes as President included negotiating with the Russian government to allow Inuit of the Chukotka Peninsula to participate in the ICC, and leading a delegation of Canadian, Alaskan, and Greenland Inuit to Moscow to meet with the Russian government.

During the repatriation of the Canadian Constitution, Simon played a key role as a senior Inuit negotiator. She also served as a member of the Nunavut Implementation Commission, and Secretary to the Royal Commission on Aboriginal Peoples. In 1994, Simon was appointed by Prime Minister Jean Chrétien as the first Canadian Ambassador for Circumpolar Affairs.

As Ambassador, Simon took the lead role in negotiating the creation of the Arctic Council, which was formally established with The Ottawa Declaration of 1996 to include the active participation of the Indigenous Peoples of the circumpolar world.

Simon was named to the Order of Canada in 2005, the National Order of Quebec in 1992, and was awarded the Gold Order of Greenland in 1992 among many other honours.